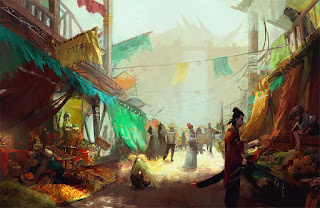 The Throat is the commercial district comprised of everything from bazaar-like clusters of brightly colored tents, to raised auction blocks, to looming guild halls built of polished Tarrasque bone. The following is a selection of random encounters for a party travelling through this zone.