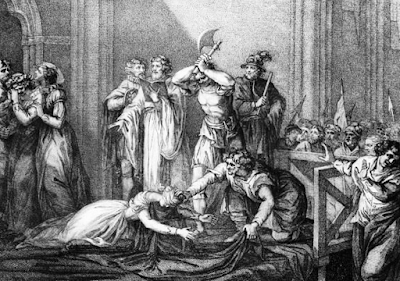 The Enders are the rumored group of individuals interested in discovering or inventing a way to permanently kill the Tarrasque. While this was the stated goal of the original heroes that bound the Tarrasque, most modern citizens of Salt in Wounds have no interest in the pursuit as it would, effectively, destroy the economy and reason for existing of the city. In addition, the majority of those rare individuals who would be interested believe that the lasting death of the Tarrasque is impossible.
Occasionally, individuals are prosecuted for the crime of being 'Enders' ('conspiring against the sanctity of the Tarrasque's bounty' being the official charge). This has usually been seen as political theater, a baseless charge used to dispose of persons who've angered the powers that be. Most sent to their deaths in this way claim their innocence right up until the end while some name their co-conspirators (who are then also tried and inevitably found guilty).
The accepted wisdom of the cynical Salt in Wounds populace is that the 'Enders' don't exist beyond a few isolated madmen.