10 Delicacies of Salt in Wounds 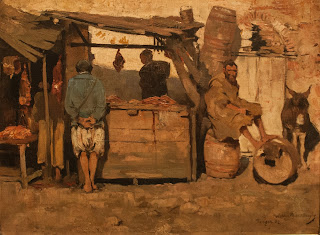 Five-Roast Five-Roast is a stirge stuffed in a singing house-lizard stuffed in a hatchet beak stuffed in a juvenile remora flea stuffed in an axe beak. Before encasing it in the next layer, each animal is cleaned, skinned/plucked, coated in

As a polyglot metropolis, Salt in Wounds is awash with color, symbols, and imagery imported from dozens of ethnicities and cultures. However, certain motifs carry over into the sigils, seals, and other identifying marks of the aristocratic houses, merchant guilds, and those belonging to high profile individuals.
Of course, imagery
Read more »
Posted by JMPerkins No comments:


This diminutive subspecies of axe beak (a supposed cross-bread with blood hawks) is a creature common to Salt in Wounds although many more thousands have been exported in recent years. These riding dog sized birds can readily serve as mounts for small creatures in addition to providing home & property defense or even serve to bolster militia forces. While not
Read more »
Posted by JMPerkins No comments:

Email ThisBlogThis!Share to TwitterShare to FacebookShare to Pinterest
Labels: For GMs, Monsters 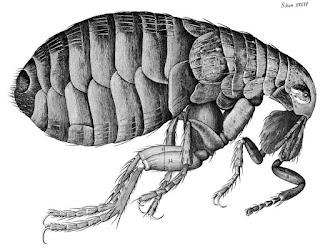 These gigantic vermin –roughly the size of a horse- are one of dozens of native species of parasite & symbiote that live upon or within the Tarrasque. However, they are one species that has managed to thrive even post-binding and represent a continued threat to the citizens of Salt in Wounds and its environs. Ramora Fleas resemble exactly a titanic version of an ordinary flea that can be glimpsed under a magnifying lens; all chitonous plates and oversized legs. When not feeding upon the Tarrasque, they can grasp a creature with their forelimbs before plunging their mouthparts into flesh, and their ravenous thirst can drain a man in less than a minute. They are also capable of leaping hundreds of feet, even whilst holding a screaming duergar.
Due to their mobility, Ramora Fleas represent a fast moving hazard to the entirety of the city and beyond. God-Butchers regularly scour the surface of the Tarrasque to kill these creatures and destroy their eggs; issuing city-wide warnings when they plan to disturb a patch of the things… anticipating that dozens if not hundreds will flee over the walls of the fortress Salzinwuun into the districts beyond. Certain individuals with racial or magical control over vermin prize these creatures as incredibly powerful servants and mounts.


(For some of my thoughts about the size of Salt in Wounds' Tarrasque/how horse sized creatures could hide on it - check out some of my design notes here.)


Like this post? Click one of the share buttons below to let the world know. This post made possible by the Salt in Wounds Patreon Supporters. Make more Salt in Wounds happen and become a Patron today! This post may make use of an Open Game Licence. Check out the OGL page for more information.

Posted by JMPerkins No comments: