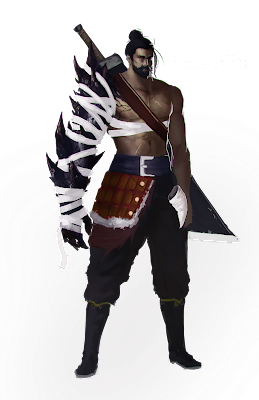 
Briddu Yittano is a large, heavily muscled man with brown skin, black hair and gray eyes. His face is well lined from a hard life, his most notable feature is his right arm which is an enlarged wrap of throbbing muscle, purplish and scaled where it doesn't have the look of exposed flesh. Briddu has a near-permanent scowl on his face.


Briddu grew up poor in the Hind Quarter (what would become the modern day Tail Stones District). During the 12th Meridian crisis, Briddu’s family’s hovel was one of the innumerable residences smashed by stones sent careening by the Tarrasque's tail. While his family was gathered around the dinner table, a large boulder crashed through the roof. Briddu's mother and sister were killed instantly, while the stone settled upon his screaming father’s legs. This was only the beginning of his trials.
In the days to come, as the God-Butchers worked to get the beast back under control, as leaning buildings collapsed and ankhegs stalked the Tail Stones district unchallenged; Briddu would do his best to care for his trapped father and little brother. He tried to get help to move the large stone that pinned his father, but no one would listen to the scrap of a child crying for aid amidst the cacophony of the grieving city. The boy shifted focus to just getting enough food and water for what remained of his family, on just getting through the day. When his father’s legs began to sour, Briddu assisted the older man in cutting himself free, gathered the maggots to eat away at the diseased flesh till the stumps bled again, and finally sewed and sealed the flesh with fire. After, his father was never the same and a fifteen year old Briddu vowed that he would die before he would ever be diminished in such a fashion.
After, he spent every dawn waiting for hours in the long 'relief' lines, trying to get through the crowd of panicking refugees to beg for his family’s ration of water and gristle-hard Tarrasque jerky.
As the monsters and brigands were (mostly) cleared from the streets and the Tail Stones District was returned to a semblance of order, Briddu found work where he could. In an effort to rejuvenate their tarnished image, the God-Butchersbegan a large scale recruitment drive, specifically targeting the lower classes. The teenaged Briddu leapt at the chance to join.


The Development of a God Butcher


Even on an apprentice’s salary, Briddu earned enough to provide for his maimed father and sensitive brother, and he has continued to support them ever since.
Briddu quickly rose through the ranks of the God-Butchers; getting up sooner, working harder, striving to be better and always pushing through the hardships like a man possessed. If he became strong enough, then he’d never have to feel the fear, the vulnerability of being that beggar boy from the Tail Stones ever just three days away from watching his little brother die of thirst. By the time he reached journeyman status, Briddu had gained a reputation as a tough-as-horn burke who worked without quitting and terrified his underlings while deferring to his betters. He spent some time serving on several different meridian details until he’d finally gained enough ‘yay’ votes from other God-Butchers to attempt the Rite of Mutual Recognition.

Everyone expected Briddu to pass the Rite of Mutual Recognition without incident. But when he stared into the eyes of the Tarrasque he saw the boy he was; trembling, afraid in the ruins of a home while his father wept. In the beast’s pupil, the scared child he’d denied so long stared back at him. He tried to ignore his fear, charged forward to sever the tongue anyway. But his footing was off, and the delay of a single stutter step caught him in the beast’s jaws.
The Tarrasque tore off and consumed his right arm and shoulder, tossed him away like he was nothing more than the Tail Stones trash he always secretly believed himself to be. As Briddu bled out, struggling to use his greatsword to prop himself up to stand, his God-Butcher brothers & sisters rushed in to help him; screaming for the surgeon-alchemists.
Applying a pancreatic poultice to his ruined shoulder, the healers only intended to staunch the bleeding. While limited regeneration is not unknown when using Tarrasque derived alchemy, it many Briddu included, when the limb grew back in its current form. Briddu Yittano is the most successful such recovery to date, so much so that he was able to resume his duties as journeyman God-Butcher, dedicating himself to retaking the Rite of Mutual-Recognition.
Behavior
Briddu has a tremendous chip on his (disfigured) shoulder, due in equal parts to his personal history, his failure in the Rite of Mutual-Recognition, and his sensitivity about his appearance. As such, he uses his status of God-Butcher as well as his own obvious martial prowess to bully his way through life deferring only to Master God-Butchers. Briddu regularly picks fights, is belligerently drunk on blood wine much of the time he’s not actively working.
Goals
To pass the Rite of Mutual-Recognition, either by growing strong enough or by gaining some unknown advantage.
Plot Hooks/GM Uses