Want more? January is the last month to preorder the Salt in Wounds Campaign setting. Place your preorder or learn more about the project here. 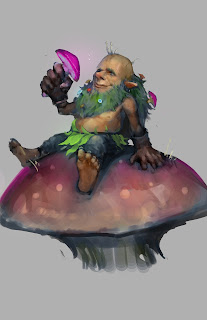 After he rebirth, Dibus would sometimes have trouble recalling his life, before: days filled with gnomes, gears, cogs, smoke, and fire. But he did remember some things.

The middle child of five siblings, he felt he was often forgotten by his family. He never really seemed to mind though as it left him time to go on walkabouts. He loved to be in the wilds, and felt at times as though the plants, animals, very land could speak to him. When he shared these impressions, his family -in a rare showing of focused attention- scoffed; such daydreams were all well and good but his place was in the workshop with the family. Frustrated, Dibus discovered his love of food and cooking (and the acceptability of these pursuits); the scents of stew and mash and dishes he had to learn the name of seduced and inspired him. As he shifted from being an enthusiastic eater to a cook himself, his meanders gained a purpose: to procure only the freshest, only the most delicious vegetables, spices and more to improve his culinary craft Through cooking for his family, then his extended family, and finally the clan in total Dibus carved a comfortable, and somewhat fulfilling, niche as the go-to chef for every meal of importance. But still, his itchy feet drove him to wander further seeking some new (gastronomic) adventure till his wanderlust finally drove him to the legendary city of Salt in Wounds and the promise of tastes and flavors that couldn’t be found elsewhere.

As his chartered caravan drew close to the city, Dibus heard a call “Come to me… I have all that you seek…” as plainly as if the caller were seated next to him though none of his companions were speaking. He was confused, intrigued, and -almost in spite of himself- knew he would have to heed the call. Waiting until the caravan settled into sleep, Dibus started off into the Heartsblood Marsh. He had heard rumors of how terrible the marsh was, but also knew that mushrooms and insects of a kind not seen elsewhere grew here; that was almost enough reason for the journey even without the call.

As he walked, further and further, that voice would repeat itself, growing stronger, more insistent as it pulsed. ‘come, Come, COME.”

Marching through the red muddy ground, pushing past stalks of strange willowy mushrooms that reached to the sky, and coughing hazy air filled with some kind of particulate; Dibus looked up to find a castle of fungus with a river of blood -surely it couldn’t be blood, could it?- flowing into it. He thought this to be some sort of metaphor vision or illusion, but as he stared it only solidified. This was real.

Dibus had found the Fungal Sieve, the structure stemming the tide of the Tarrasque’s blood form corrupting more of the world. And instantly, Dibus knew fear and knew he was not alone. Above him, a dozen frog-men (grippli they were called he remembered as though the bit of trivia mattered) watched him from the fungal stalks, tall as treetops, and it felt as if the growths themselves were watching him.

From within the sieve, a figure lurched out. Lithe and thin, it reminded Dibus of one of the elf-blood warriors he’d known. But rather than the regal appearance that Dibus was used to, this creature was covered in fungus of various types from head to toe. As he/they/it opened their mouth, Dibus turned and ran as fast as his legs would carry him.

Huffing and puffing through long minutes, or maybe hours, later he was lost amongst the marsh and careening as though drunk to avoid the ever-present dangers. And yet the fungal elf continued, tireless. Growing slower, Dibus leaned against a large mushroom stalk. It had been several years since he had attempted to commune directly with nature, but he figured now may be the last chance he would ever have.

Dibus tucked himself under the base of a giant mushroom and began to seek council with whatever powers may be present in the area. But this land was not like the glens and pastures of his home; this land had a distinct personality to it, one that was strong and forceful and quite insane. Reaching out with his subtle senses, Dibus’s consciousness was jerked towards the Fungal Sieve. In a vision a face appeared, a fungal version of himself, but… no. It was clearly a gnome, but the eyes flashed open with a sickly green hue to them. This face was whatever or whoever whoever had been calling to him.

“I am Afrindi, no I am Heartsblood Marsh, no I am the druid who controls this land, and you will serve me/us/I now.” Dibus felt his mind start to slip as the world shifted. He felt something gently burst near him and -mind still filled with the face of the fungal gnome- he felt a patter of spores coat his face and fill his nostrils. Dibus was surrounded by the images geometric shapes in cascading patterns, all life wobbled and weaved. He saw the iconography of ancient civilizations flash before him and began to feel more connected to the world around him and less connected to his own body and self.

In an instant everything went dark and he was again face to face with the fungal visage of Afrindi. This new visage was much more imposing and detailed than before, more immanent. As Afrindi/the marsh/whatever spoke his voice echoed through Dibus’ mind, body, and soul. He told Dibus things the former cook couldn’t begin to understand, spoke in language that made no sense. Dibus felt as if he was being deconstructed to be rebuilt into whatever form Afrindi intended for him. He could see again the fungal elf and other frog-men standing perfectly still in their new fungal forms in a ring. Dibus let out what he thought was a low guttural growl, and began to fight back. He immediately met resistance as Afrindi began shouting instead of simply speaking. The commands began to come quicker and his mind swirled deeper into and away from itself.

Then Dibus let go. Realzing fighting was pointless, he shifted his focus to things he could understand. Dibus remembered at that moment every recipe he had ever cooked and ingredient he had ever used. He set out to recite each and every one in his mind, and looked to expand into making new dishes he would have never thought of before.

He began to see a light amidst the darkness and he focused on it allowing himself to be drawn deeper into its light. It was far behind the visage of Afrindi and the others that he found the small pieces of them still left inside the Fungal Sieve. In unison they whispered “Take this knowledge, this second chance and fight…” The light washed over Dibus and his mind began spiraling backwards to where he had sat down to commune with nature. The fractals and ancient geometry faded back to the fungal marsh. The fungal elf dropped from the mushroom cap overhead bearing down on him with a blade of hardened chitin – a weapon grown rather than forged. The blade buried itself to the hilt in Dibus’ stomach and deep into the mushroom behind him. Dark lines shot through Dibus as the blade infected him. His eyes went dark and shut as he drew what would be his last breathe as Dibus Dulpinzo.

It was many days later that Dibus Morelskein would open his eyes. He stood up from the base of the mushroom where he had fallen to the fungal sword. He shook a few toadstools from his face that looked more like fungus than actual hair. He stretched his fingers felt for the influence of other minds: no, as far as he was aware there were no other influences in his mind. Whatever Afrindi had tried to do hadn’t worked, or perhaps had in ways the mad druid hadn’t anticipated. Dibus was no slave to the mad arch-druid who’d spun away his life into the fungal sieve; he was servant of the land and the creatures (mostly fungus) that longed to be free of the warped domination they suffered under.

Dibus knew what he had to do, tend to the marsh, check Afrindi’s reach, and finally wrench control of this place away from the madness of its creator… to be steward, part and parcel of the wildness here without being master was the path he needed to take.

But to do that, Dibus would need to learn more about himself, his new powers, and more about Afridini if he had any hope of winning. He sensed many of the answers he sought might be found in Salt in Wounds (and it was perhaps not a good idea to linger here in the marsh, where Afrindi’s schizophrenic attention might well return to him), so he set to walking to the city as the land whispered secret things in a voice just below the bickering chatter of Afrindi.

His stomach grumbled, and he wondered what sorts of meals he could find (or make!) along the way.

This post by Neal Powell and J.M. Perkins - Art by Jeffrey Chen.