Want more? January is the last month to pre-order the Salt in Wounds Campaign setting. Place your preorder or learn more about the project here 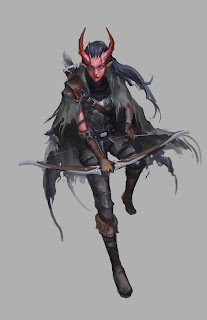 What a difference two blocks makes, Karyna Dontier mused as they notched another arrow. Two blocks from here -where Sage’s Row kissed High Throat- might as well have been a different world. There, the black fox hasn’t been raised so most everyone was likely asleep, safe and sound in their beds. Two blocks from here, there wasn’t some armored maniac -face obscured by a purple mask- trying to break down the door Karyna had just finished barricading.

Of course, two blocks from here Karyna wouldn’t have had a job, not that that seemed like such a bad thing at the moment. They’d always preferred the man hunting to man saving but sometimes you took the work available even if you suspected you’d regret it later. Which Karyna did, now.

The only reason they were quite certain the man? orc? whoever wasn’t a golem (because no person had any right to be that big) was due to his incredibly loquaciousness. He just wouldn’t shut up. Not even after Karyna had put four arrows in his body… which should have killed him a dozen times over but only seemed to piss him off.

From beyond the failing door, Karyna heard him talking, ‘The night masks want your turf and your head Pipilo… and tonight we’re taking both.’ This latest threat was punctuated by a greataxe blow that caved in the top third of the barricaded door.

‘Sir Pipilo, as your duly contracted guard I must strenuously suggest that we discuss our strategy for egress.’ Karyna said, before they fired their arrow, catching the bruiser in the eye slot of his mask. Which must have been the height of comedy where the psycho came from because it only made him laugh as he drew back the axe for another blow, one Karyna suspected would finally cave the door completely.

The client stammered something about ‘roof access’ before the hatch he was gesturing towards crashed down with a black cloaked figure wearing a purple mask landing atop it like a dancer. Black cloak smoothly drew two daggers, just as axe-psycho landed another blow that shattered the door in earnest.

‘Well, I guess I’ll be earning my per diem tonight.’ Karyna thought, dropping their bow and drawing their blade.

January is the last month to preorder the Salt in Wounds Campaign setting. Place your preorder or learn more about the project here
Posted by JMPerkins