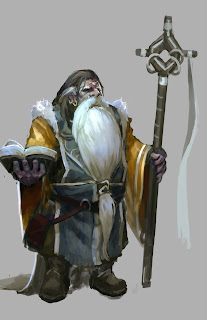 Yurin Silvenei sat on the towertop. He greeted the morning by miming the ceremonial movements of his faith sharpening his pairing knives & cleaver. Below, beyond, the city stretched out in its leagues… waking now and just beginning to shake the sleep dust out of the corners of its eyes (not that the city, nor the bounty at its heart, ever truly slept). Merchants hauled out their wares to their stalls -many ritually counting their stacks- to ask for blessings upon their day.

The gates of the fortress Salzinwuun below him opened to allow for the changing of shifts, granting admittance to the next crew of God-Butchers who chose to sleep in the city at large rather than their order’s barracks. The rich copper smell of blood filled Yurin’s nostrils (they must have opened a vein he mused). Idly, he considered the dangers he might face before turning his mind to gratitude as was proper – he loved his city and said aloud the prayer of thankfullness for the bound Tarrasque, great bounty of Macinfex that had delivered so much to so many.

“Flea!” came the cry from below, echoing from near the beast’s flesh and ending several stories below Yurin. A two hundred pound insect landed on the ground. God-Butchers drew their weapons and approached cautiously while lesser laborers and a handful of merchants fled, scattering.

From atop his tower, Yurin raised the implements of his faith to the sky, calling on Macinfex to bless the mortal butchers below. He knew from long experience, from a hundred battles with the unclean carrion feeders that first and foremost he’d need to keep the men and women alive – only after securing them would he move to calling down aggressive, disruptive magic.

Besides, the day was only just beginning and he’d need to conserve his strength.

January is your last chance to preorder the Salt in Wounds Campaign Setting - Place your preorder or learn more here.
Posted by JMPerkins