House of the Third Meridian

Overview of the Third Meridian House


In the year before binding, Lord General Alastair Ghent marshalled and led al battalion of the Army of Thirteen that would later formed the Third House. Lord Ghent was a powerful noble and a warlord of some renown even before the Tarrasque attacked known for his a taste for exotic flavors and liquors. He kept Roman DuFaine as his private valet and personal chef, a former peasant picked up out of a seedy backwater tavern where the commoner chose his ambition over a serving girl to whom he was betrothed. Roman had always had ambition above his station, and this was not lost on Alastair. The valet was present for every meeting, in every war room, and overheard every business dealing, and the various currents of black mail that Lord Ghent ever
Read more »
Posted by JMPerkins No comments:

House of the 10th Meridian

The House of Whispers

Every aristocrat, from the lowest pickling house sub-scion to the Prime Meridian House Stewards themselves, has at least one hazy memory from a House Impertabo soiree. Those memories are painted from a wide palette: the spreads of luxurious foods and exotic drink, the meticulously manicured gardens and arboretums, the silver platters spread not with multi-hued gems but a selection of the House's designer drugs, the loud and boisterous lesser House fuori, and the lingering presence of the silent, masked House elders watching from balconies above the ballroom floor.


From the outside, House Impertabo appears to be two houses. First, there are the fuori: the younger scions of the House known for raucous behavior, unabashed revelry, and jovial brawling. To the lay person, these are the only members of the House they see or interact with. The second house, the precisi, are the elders: enrobed, unnaturally silent, masked figures
Read more »
Posted by JMPerkins No comments: 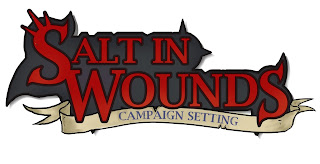 Click here to pre-order your copies via backerkit today.
Posted by JMPerkins No comments: