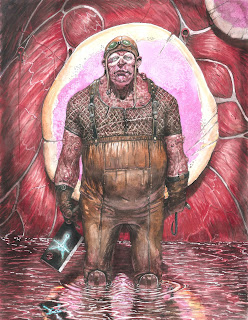 He knew digging in slurry and mud and sand, digging pits to sleep in and digging traps to catch something to eat. He knew digging in every callous along the pads of his seven remaining fingers, knew in the ache of his back, knew it on his tongue and in his bones. He was slave caste, told by his tribe that he was half-born and good only to dig. So he’d dug, lived on scraps, and tried to avoid notice and the beatings that came with it. Until after the battle that had smashed his people, left him to wander, till he’d heard tale of a city that had a place for him; that would feed him for digging.

So he’d come to the city, this place called ‘Salt in Wounds.’

And then Narku had learned new things, about ‘money’ and ‘pay’ and ‘debt’ but also something new about digging; how to dig into the monster.

Now, when he wasn’t sleeping or drinking, when he was instead ‘working’ to ‘afford’ (novel concepts all) for his sleeping place and his drink, he dug. Here, once the big machines cracked open the armored scales the men would scream, urge him through the pulsing fissure and then Narku and those with him would dig through skin and flesh and even sometimes through bone. Racing to dig to some organ, grand or lesser before the body -ever resentful of holes and jealous to keep its secret wealth- would close up around men and equipment besides.

He knew that every time he dug he could die. Like slurried sand, the tunnel could collapse on you as you dug, the beast would groan and the spanner would buckle and snap, fail; and you would be caught breathless as a river of blood poured down or the meat of the thing grew back together, twisted to rejoin. It was a bad way to go; drowning in a red and throbbing darkness. With a crack of spade or pick, they’d find bodies and tools of the dead sometimes, fused into the flesh in which they dug. But Narku had to keep digging anyway. After, Narku tried not to think about it over drink, tried not to dream about it.

Sometimes he even succeeded.

Narku thought his whole life would be digging. Until he saw it, the secret wealth.

Shoveling back another scoop to the blind bucketeer behind him, there it was, nestled in the floor; a gray orb, waxy, just visible through the dancing shadows cast by his tallow lantern light. Ambregris, worth more than many miles of meat; a little perfect gem of it. He knew what it was because he’d watched an overseer shove many aside for a much smaller piece, watched the commotion outside as they’d argued over who it belonged to while work stopped. After, drinking in the hall, another miner had told him what it was worth.

He knew what he should do, call an overseer and then keep digging as he was told.

Almost as if his hands had a mind, a will of their own; Narku snatched the reagent from the tunnel floor, shoved it into his apron. Claimed a chance to know something beyond digging. In that moment he prayed to all the gods; they had never smiled upon him… not before in his life of hunger and fear and certainly not now in his life of toil and terror. But he prayed all the same, that none had noticed what he’d done. And it seemed, for once, that the gods were kind. No one said anything, so he kept working like everyday, letting himself be soaked by the creature’s blood and his own sweat.

Wealth beyond measure, sitting safe in his front pocket. Later, maybe he’d find a burke who knew some alchemist, their walls full of twisting glass, who would pay a tribe’s ransom in gold for it. Maybe he would learn new ways of being, something beyond digging; a life of water dens and vegetables and ease. But for now, he couldn’t betray a twinge of anything the matter, anything
different. For now, all he could do was dig, and see what the morrow would bring.

But that was fine, because Narku knew digging.

Want more and want to play in this world? January is the last month to preorder the Salt in Wounds Campaign setting. Place your preorder or learn more here

Email ThisBlogThis!Share to TwitterShare to FacebookShare to Pinterest
Labels: Characters