The Salt in Wounds Campaign Setting is a kickstarter funded game world for 5th Edition and Pathfinder rulesets spanning a multiple supplements and publications. The evil mega-city is fed and powered by the endless butchery of the unkillable Tarrasque creating a bizarre, alien, but oh so believable weird fantasy. The sprawling gritty, bloody, intrigue soaked streets are the perfect place for GMs and alike Players to create adventure.

All rules are covered under OGL licenses. All stock art is covered under its own licensing requirements. All proper names, commissioned art, and other 'intellectual property' was originally copyright John Perkins/Pangolin Press but has now been released into the public domain. All files associated with the project can be viewed/downloaded here & you can buy copies of the published books below.

Salt in Wounds is the most imaginative role-playing game setting it’s been my privilege to play in a long time. Equal parts grotesque and delightful, what J.M. Perkins has created here is masterfully realized and intriguingly believable. I highly recommend a visit to the city of Salt in Wounds -if you have a strong stomach, a love of fantastic world building, and a taste for the bizarre. In a plethora of game settings, this one stands out.

-Lou Anders, Author of the Thrones and Bones Trilogy

Everything you need to run or explore the fabled evil mega-city built around a bound Tarrasque, who is slain and butchered everyday to feed a hungry metropolis. Containing both 5th Edition and Pathfinder rulesets, this book features:


Descriptions of dozens of monsters and hazards including
10 unique monsters
Pages of random encounters
An introductory adventure
New Fiction
Dozens of locations and NPCs,
and much much more.
Learn about the terrible secrets of the city, gain an understanding of the city’s myriad factions all scheming for advantage, explore the city’s history from the centuries from before the great binding to today and game in the city destined to launch a thousand adventures... because no matter what, everyone around the table is about to have a bloody good time. 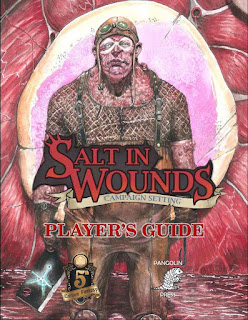 Adventure in the dark fantasy city fed by the eternal butchery of the legendary Tarrasque! This Player’s Guide is the essential resource for the Salt in Wounds setting and beyond. The book includes dozens of options and information to inspire hundreds of unique, never before seen characters including:

Whether you’re a player looking for captivating new options or a GM looking for inspiration this book is for you because playing in the Salt in Wounds setting means everyone around the table is about to have a bloody good time.

Carving up the Tarrasque

Carving up the Tarrasque: Crafting & Alchemy Supplement by Jesse Brake and J.M. Perkins you’ll find a new aspect of the legendary monster to threaten or empower PCs: via crafting wonderous goods from its magical flesh! While designed specifically for the Salt in Wounds Campaign Setting, this supplement adds options for any game where the Tarrasque has bled or some equivalent taint mars the land. This booklet includes:
Whether you’re a GM or a PC there’s options and lore to help flesh out your creations and get into the game.

Corruption of the Tarrasque

This supplement presents new aspects of the legendary monster to threaten or empower PCs: via the corrupting influence of its mutagenic blood! While designed specifically for the Salt in Wounds Campaign Setting, this supplement adds options for any game where the Tarrasque has bled or some equivalent taint mars the land. This booklet includes:

Rules on Tarrasque-Fed Mutations.
Brand new fiction.
Alchemical Services to induce or remove mutations.
20 new Mutations for PCs and Monsters alike ranging from beneficial ‘Favored’ Mutations to debilitating (or even deadly) ‘Blighted Mutations.
The Tarrasque-Transformed monster template which can transform even a lowly cur into a deadly miniature avatar of the Tarrasque.
A brand new Sorcerous Origin: Primordial Bloodline which empowers sorcerers with the uncorrupted essence of the Primordials to create and transform the world and even magic itself.
Whether you’re a GM or a PC there’s options and lore to help flesh out your creations and get into the game. Note: this purchase includes two pdfs one for the Pathfinder ruleset and one for the 5th Edition rules of the World’s Oldest RPG.

This collection of essays serves as the ‘commentary track’ for the smash hit Salt in Wounds Setting and features advice, insight, and a fresh look behind the screen of a professional writer and game designer. Whether you’re a player looking for a new perspective, a GM aiming to build richer worlds, or a hobbyist game designer/writer striving to make the leap towards being a professional: there’s something in Design Notes for everyone.
Featuring Essays About the Following Topics:
And much, much more.