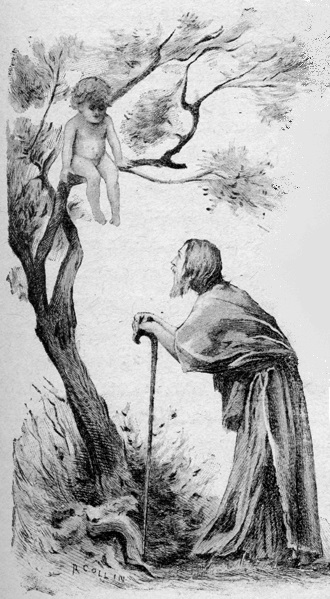 
Lazarius is a haggard, young male human in fine arcane robes that have been badly laundered. On his face he always wears a pained, plaintive smile. Kreval resembles nothing so much as a flying, ruddy cheeked human baby. His expression is almost always one of fury, which only manages to make him appear cuter.


Lazarius is a fourth cousin, twice favored, once removed of the current Binder-Lord of 8th house. Expressing a desire to learn arcane magic, his parents hired the best wizards available to teach the young man. Unfortunately for the tutors, Lazarius is of middling intellect, completely unsuited for his studies. To make matters worse, he is almost supernaturally clumsy; breaking, smudging, ripping, or otherwise fouling up any delicate item, spell working, or apparatus he gets his hands on (even if he never actually touches any portion of the magic).
When the tutors attempted to inform Lazarius' noble parents of the problem and why they would be unable to teach the 8th house aristocrat magic, they were flogged.
Now fully aware that failure was not an option, the tutors decided upon a plan that would satisfy the 8th house nobility and free them of Lazarius. Pooling their resources, they managed to (temporarily) raise Lazarius's competence while keeping him under constant supervision all in order to (barely) guide Lazarius through the foundational work to become a diabolist (that is, a wizard who makes a pact with the infernal realms in general and a specific imp in particular for greater knowledge and power). From Hell they called up Kreval the Imp, who was eager to step up for this bond as -in Lazarius- he sensed a weak willed simpleton who the small devil assumed would be easy to bend to the greater glory of Hell.
With the accord struck and Kreval summoned as his imp companion, the (greatly relieved) tutors took their leave with the family's blessing; assuring Lazarius that he would now be instructed by a far superior teacher.
For his part, Kreval was initially delighted to have such a malleable 'master' who would be so easy to bend into proper form. In kind, Lazarius was happy to finally have the true teacher he'd been promised, confident that he'd finally master the magic that had thus far eluded him.
In the months since the summoning, Lazarius has learned nothing and every dark deed or devilish rite attempted by Kreval has been foiled, not by any goodness or even cleverness; but merely by Lazarius' seemingly boundless incompetence.
Growing more desperate to have some manner of gain to show his superiors (and becoming more physically and verbally abusive to the eager-to-please Lazarius) Kreval began construction of a portal that would allow unbound imps and other lesser devils to cross into the material plane freely. While he kept Lazarius's involvement minimal, the ritual required the willing cooperation of a mortal spellcaster and thus he had no choice but to leave Lazarius with a critical task of saying a command word in infernal at the appointed hour. Despite the myriad safeguards the imp put into place, the diabolist somehow managed to ruin the rite by speaking the celestial word for 'cute' at the crux of the working. This caused the arcane energies to backfire into Kreval in ways even the most brilliant mage would have trouble explaining. The end result of this flubbing however is plain to see, the horrifying imp's appearance has become its own inversion: that of a round faced cherubim.
The enraged Kreval has still yet to forgive Lazarius. The imp is now a laughingstock amongst his devil superiors, dismissed as unable to accomplish any of his aims. It is assumed that when Lazarius finally dies and Kreval is sent back to hell the torture he'll receive from his inevitable failure will only be exacerbated by his terrible (if amusing) appearance. Every day, Kreval grows more desperate to escape this fate.


Lazarius and Kreval live in the Tail Stone district, where the noble scion's generous allowance will allow them to support themselves in relative luxury amidst the squalor indefinitely. Kreval beats and torments Lazarius whenever possible, mercilessly antagonizing the diabolist for ruining the imp's face.


Lazarius' goal is to become a truly great mage and make all his friends happy, including Kreval.
Kreval, now written off by hell, has stated his goal is to perform 100 truly 'good' acts in order to buy his way into acceptance with the celestial orders. Whether he is sincere, or if this is a falsehood perpetuated by the imp to support some other scheme is unknown.


The PCs could be called to deal with a summoning gone wrong and discover the imp and the diabolist.
Kreval could reach out to the PCs, needing help to perform his 100 good deeds.
Lazarius could hire the PCs to gather rare spell components at the behest of the (in hiding) Kreval.
Kreval might beg an arcane minded PC to take him on as a familiar in order to be free of Lazarius.