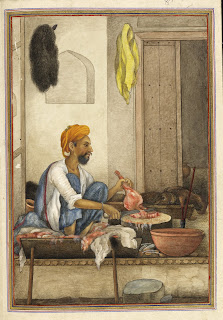 Macinfex is the (Demi)God patron of butchers. For the world at large he is a minor figure; often considered to be barely a divinity or dismissed as an upjumped saint; honored only occasionally in an odd window of butcher's row. Salt in Wounds is not like the rest of the world, and here he is a if not the primary deity; worshiped by many, respected by all. Only the church of
Coin Everlasting boasts as much influence in the city and it's ranks are almost exclusively comprised of the rich. In Salt in Wounds, worship of Macinfex extends to all classes and all peoples.


The holy symbols of Macinfex are the knife and cleaver.


Macinfex's clergy are very much entwined with the economy of Salt in Wounds; carefully monitoring the selling of meat. Cleric inspectors will survey the merchants, insisting that butchers and sellers throw away (or feed to the ghouls) old, potentially dangerous cuts of Tarrasque, and ensuring that cuts and quality are carefully labeled all as part of their religious observances.
Devout worshipers of Macinfex are known to be obsessed with taking things apart to better understand their workings; extending an interest in the 'anatomy' of all living (and even some nonliving) things.
By cleric devotees, the imprisonment of the Tarrasque is seen as his greatest gift to humanity; abundant food for all made possible through perpetual butchery that does honor to Macinfex. It is no surprise that his worship is most fervent amidst the God-Butchers; with devotion bordering on religious fundamentalism a practical requirement for aspirants to reach the rank of Master God-Butcher.


In Macinfex's temples and churches, accurate prophecy and divination is accomplished through the spilling of the entrails of cattle (although in secret churches, heretical clerics insist the best results are to be obtained by using humanoid 'livestock').
In addition to traditional magic practiced by clerics everywhere, the faithful of Macinfex have been known to offer healing and regeneration through consecrated cuts of meat and vials of Tarrasque blood. There is surprisingly little antagonism between the Church and the various alchemists of Salt in Wounds, as the religious orthodoxy believes that all efforts to unlock further properties and benefits of their god's great gift should be pursued.
Many of Macinfex's clergy utilize the Blood Domain.