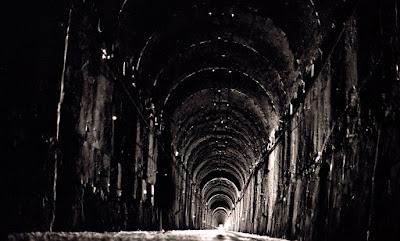 Almost everyone has heard about the tunnels and passageways that riddle the earth below the city of Salt in Wounds – the so called ‘Capcaps.’ Unfortunately, much of what is ‘known’ is incorrect, the product of speculation, heresay, and unsubstantiated rumor liable to get a would be explorer hopelessly lost.

The Capcaps are an odd mix of ever-changing ankheg hunting-tunnels, the ruined vaults and halls of the abandoned dwarf city of CarDouf, and the mishmash of (more recent) excavations by sentient creatures that connect and build off the other two. These range from meter wide tubes which can only be crawled through to cavernous amphitheaters which seat hundreds. None of these are sewers however (although some sewage and refuse of various kinds does seep into them) as –instead- waste is generally handled by dumping into the Red River.

God-Butchers dig ‘testing wells’ straight down in order to make seasonal forays into these tunnels, specifically with the aim secure and destroy any underground access to Salzinwuun and to slay or drive out the Ankhegs that dig their way to the prone Tarrasque to feed. Otherwise, the Capcaps are left unpatrolled and –as such- are favored haunts of smugglers, monsters, and other secret forces drawn to the city but unable to operate in the open.

Secrets Other than the exploratory ‘wells’ dug by the god-Butchers, entrances to the Capcaps can be found in the basements of gang headquarters, in nearby cave systems, and other secret sites throughout the city. Once the Capcaps have been entered, there is a path to almost anywhere in the city although even the well traveled ‘guides’ know every little about the total shifting geography and usually stick to their five or six favorite ‘routes’ to navigate the mazelike environs.

Derro have colonized the deepest parts of Cardouf –the cavernous royal tombs- where they conduct alchemical experiments on captured humans and demi-humans. Most notably, they have recently begun to transform ordinary humans into worm-like Alchemical Oblates which are capable of producing high quality imitations of controlled or otherwise unavailable Tarrasque extracts.

A cabal of Blood-Merchants has sent down engineers protected by mercenaries to assess the feasibility of opening up and retrofitting the Capcaps to make it suitable for housing of the poor who don’t mind (or will be forced to accept) underground lodgings. The engineers have set up shop in the former feast hall of Cardouf, though it has been weeks and following the collapse of some tunnels after a Tarrasquequake they no longer know how to find their back to their exploratory well that could lead them to the surface. Growing increasingly paranoid these groups of scouts assume everyone they encounter are dangerous criminals sent to rob them, or rival operative seeking to undermine their claim.

There is an entrance to the underdark in Cardouf, which is currently controlled by the Derro. Several underdark factions suspect this and have been drafting plans to seize this point of access (and the unknown area above it).

Email ThisBlogThis!Share to TwitterShare to FacebookShare to Pinterest
Labels: Basic Info, For GMs