The Ghouls of Salt in Wounds 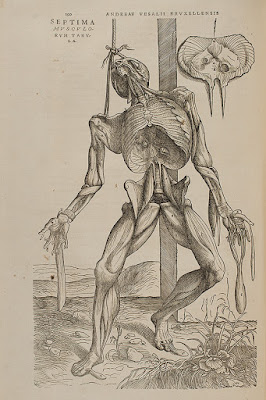 Despite the more poetically minded chroniclers claiming that the entire city is comprised of ghouls and parasites, literal ghouls comprise only a small percentage of the population of Salt in Wounds. While the statecraft of 5th House has gained them begrudging legal acceptance by the legislators (aka the other meridian houses) they are still largely despised and feared by the general population.
The primary legal argument that 5th House presented to justify the legalized creation of ghouls is that issues of ghoul attacks/violence is driven by unsated hunger for flesh, which -they argued- would never

be a problem in Salt in Wounds. While this isn’t necessarily true, in general by eating twice their own body weight in meat each day (usually spoiling Tarrasque flesh) ghouls are able to function as any other demi-human (though many choose to supplement their diet with meats of all kind, including that of sentient creatures). Ghoul citizens employed by 5th House have now largely replaced Otyughs as the primary disposal mechanisms for the tons upon tons of rotting meat produced by Salt in Wounds weekly.


5th House offers ghoul contracts, legally binding arrangements wherein the alchemist-necromancers of 5th House guarantee that they will resurrect individuals as ghouls. To enter into the contract, the would-be undead must either pay a hefty fee or pledge to serve 5th house tirelessly for 100 years. This resurrection is usually handled by implantation of a small alchemical device filled with specially modified ghoul fever which ‘bursts’ when its owner’s life functions have ended. Implanters deny any rumor that the implant can burst upon non-deadly impact.
While open to individuals of all walks of life, this offer (unsurprisingly) has largely been taken up by the desperate and damned. The ghoul contract is viewed as an insurance policy against a less desirable after-life destination or (perhaps more worryingly) the equivalent of an ethical blank-check to live life however one wishes without supernatural consequence.
The process of ghoulification -as well as the resulting ghouls- have some distinct (though not always predictable) differences with traditional ghouls due to the 5th House ghoul creation process being a marriage of traditional ghoul fever infection and Tarrasque derived alchemy.

When a character becomes a ghoul, they replace their subrace bonuses with the bonuses and penalties associated with being a ghoul. For the following races *without* a standard subrace, they give up the following features upon becoming a ghoul.

You have been raised from the dead by Salt in Wound’s alchemically modified version of Ghoul fever. Most likely, you now owe a 5th House a tremendous debt for the licensing of your ‘resurrection’ or -if you are unlicensed- face summary destruction if you are found out. As a ghoul, you can continue to function much as you did before your death provided that you can gorge yourself on flesh… a more or less simply matter within the city limits but a significant concern if you venture beyond. Most ghouls have a chaotic and evil alignment, their hungers barely kept in check by threats (although exceptions do exist). You have the following traits:

Whiff of the Dead

You lose 3 points of your charisma score.

You are undead and do not age.

You are immune to poison damage, as well as immunity to being charmed, exhausted, or poisoned. You are resistant to necrotic damage.

For every day you do not consume two times your own weight in flesh, you gain a disadvantage on all charisma, wisdom, and intelligence based checks and your intelligence score is reduced by 1. This disadvantage and half of the intelligence reduction (rounded down) is restored when you finally eat. If this drawback would ever reduce your intelligence score to 3 or less, you are reduced to a mindless, bestial state that will attack the nearest source of flesh. Because of your undead nature, magic like ‘Greater Restoration’ can not restore this reduction.

If you take two rounds to eat your weight in flesh, you regain all lost hitpoints. You can not utilize this ability again until you have completed a short or long rest.

You may use your action to make an attack with your claws. This attack deals 1d6 slashing damage plus your Strength modifier and you have proficiency with the attack. The damage of this attack increases to 2d6 at 5th level, 3d6 at 11th, and 4d6 at 17th. Because of your unnatural physiology this attack is not considered an unarmed attack, and is not considered a monk weapon.


Note: Because of the Ghoul’s undead nature, they are unable to avail themselves of *most* healing magic (this will be stipulated in the description of the spell).

Email ThisBlogThis!Share to TwitterShare to FacebookShare to Pinterest
Labels: 5e, Basic Info, For GMs, For Players